This app is enough to make me get an iPhone….almost.

Where are these grapevines?

A relatively new app for the iPhone (sorry, no Android one yet), Context Camera is a great way to record the location, date, and time of the photos you take with the iPhone and have them displayed right on the photo. If you look at the latitude and longitude of the photo above of grape leaves you can see where I took it. Put put the coordinates into Google Maps with a negative sign in front of the longitude. The street view will show you the where the grape vines are. The app also shows the time of day, date, accuracy, and direction you are facing. There are two comment areas where you can enter up to 16 characters each. This is helpful for a plant name, collection number, collector, or anything else you can think of. I have been using it to record invasive plant…

Disclaimer:
1) Generally I am not directly quoting anybody, unless you see quotation marks. All factual errors are mine!
2) Re: above-Corrections are appreciated!

Nikki Cerra gave us as much of an overview in landscape design with native plants as time and some gorgeous slides allowed. Topic number one was….

Why landscape with native plants?
A native species is defined by both a geographic and a time reference. In NYS, it generally refers to pre-European settlement.
*Native plants support the ecological food web-plants,insects and animals have co-evolved. For example,plants provide food for wildlife at the time they need it.
*They are suited to the habitate, requiring less care and pesticide use.
*Esthetically, they provide a connection to one’s sense of place.
*Because they are more likely to thrive in their own habitat, they can save you money.

Site Analysis & Inventory
What type of soil do you have? If you can roll a damp ribbon with it two inches long, you have loamy soil (composed of sand,silt and clay in relatively even concentration). Another test is to put some soil from your site in a mason jar and mix with water and a teaspoon of dish soap. Let it settle for 2 hours.The sand will be on the bottom, silt in the middle and clay on the top.

First, clear out the invasive species-let’s hope this is not a tall order! Then create a Base Map of your site (including a list of your existing plants. To get scale, try using Google maps and a scale of 1:4 or 1:8. Note the following:
The Site–Prevailing winds, the topography of the land,existing structures nearby
The Hydrology-Both natural and man made
Design constraints-Wires, access for people
The Light-How much light, and at what time of year.
Existing Plants
Your Local Native Species & Habitats-If you have or can create a habitat for 3-4 regional species, other species will be drawn to it and be included.

Human and Bird Essentials
Human needs I didn’t note down. I felt I had a pretty good idea both by instinct and training. Bird essential are pretty obvious,too-shelter, water, nesting sites and food.  Most birds are insectivores, and even the ones that aren’t feed insects to thier young. In the winter, berries can be found on dogwood, Malus corinaria (sweet crab),Quercus alba (white oak).
Birds prefer their water on the ground and, in the summer, in shade. A bird bath should have a rough surface for better footing and be 1/2″ at the edge to 2″ at the deepest. They also like moving water. For low-tech system, suspend a bucket with a pinhole in the bottom over the bath and let it drip.
Shrubs and trees should be a mix of evergreen & deciduous in various heights, as different bird species live at differing heights. For nests, birds prefer thorny plants like crataegus (hawthorn), Rosa carolina or meadow rose. The more variation the more different niches available for different birds. You can create a bird friendly hedgerow by simple running a wire between two posts for birds to perch on. Their droppings wil plant the seed of their prefered berries for you!

Basic Design Concepts
Basic design elements include Lines, both vertical and horizontal (trees are an example of vertical lines). In addition, trees have Forms, such as circular or conicals, as do perennials. This combination of Line and Form creates Mass. Texture can be fine, medium or coarse-mostly medium. Fine texture with coarse behind it makes small areas seem bigger. Coarse in front with fine behind makes big areas cozier. 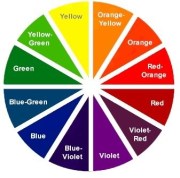 Color options can be monochromatic, analogous (adjacent on the color wheel), or complementary (opposite on the wheel). Styles range from naturalistic to formal. You can reveal or conceal the view. Use native plants combined with landscape design principles for gardens that are not just beautiful, but beneficial to other living creatures.

A very interesting symposium, much more interesting than my notes. The first two topics directly related my interests in our type of forest and the restoring and maintaining degraded meadows and woods.

Toward a Basic Understanding of FL Plant Communities-Peter Marks

I found this  talk so fascinating, I had to get his book. In it, he describes a holistic perspective of understanding plants and how they cluster in the environment using the principle factors that shape plant communities, associated communities and successor communities.

You can predict plant species from the environment & vice versa. Soil conditions include moisture availability and acidity. Moisture is related to geology, fertility is tied to pH. Additionally, soil profiles may be different. For example, the top layer may be acidic, the bedrock lime. Small, shallow rooted, acid tolerant plants grow in the top layer; deeper rooted trees (like basswood) must be able to tolerate acid until their taproots grow .

We have about 20 plant community types in this area. Familiar types include:
-Moist, upland forests (the most common), typically with sugar maple and basswood, but there is also the pine/hemlock version.
-Dry uplands on rock ridge tops and steep upper slopes that are south or east facing
-Swamp forests with maples, cinnamon fern, and swamp cabbage

Tompkins County’s forest regrowth is dramatic. In 1790, we were 100% covered. By the1900’s it was down to 20%. As of 2000, forests are back up to  60% (40% secondary, 20% primary). Therefore, an understanding of plant communities requires knowledge of land use history. One source of info is military tract surveys, which were measured out with chains. Main roads were often imposed on lot boundaries. (An example of information from a survey is of an area described as ”was as bad a swamp as compass ever passed through.”)

Primary (not “Old Growth”) forests may have been logged or used as pasture, but not farmed. Selective cutting seems to leave original composition intact. In the 1790’s most of the region was Moist Upland forests, with beech, sugar maple, hemlock, basswood, ash, and other trees. Dry Upland forests of oaks, hickories, and pines were common on the slopes above the larger lakes, while scattered swamps and other wetlands occurred in areas with poor water drainage. Wetlands were especially common on the lowlands north of the Finger Lakes. The Moist Upland associated plant community includes  bloodroot, Red Trillium, and White Trillium.

Secondary (previously farmed) forest takes about 30 years from abandonment to forest. When 80-100 years old, it no longer has compacted soil and may consist of Red Maple, White Pine, White Ash, Sugar Maple (less common), and Quaking Aspen. Associated plant communities show less diversity, more invasives, and may include Starflower, False Solomon’s Seal, and Jack-in-the-Pulpit. There may be more of a hodgepodge of plants due to random adjacency to woodlands and other fields. Deer influence in secondary forests is huge during the movement from meadow to forest, but eventually the forest comes in.

Adapting the Processes of Vegetation Change to Landscape Creation-Larry Weaner

Larry reviewed how ecological processes determine native plant communities. For instance, Native Americans cultivated nature massively. There are no “untouched” natural systems, so just “leaving it alone” doesn’t naturally become the original landscape. For example, Fort Indiantown Gap, PA has largest native grasslands in the east. It has few invasive species and  some rare butterflies due to fires started on bombing range.

We need to understand & direct the ecological process. It’s not just a matter of switching native for non-native, or letting the woods go. Read the landscape to predict the natural results from interference.

The majority of trees in late successional forests come from seeds already there. Remove the overgrowth and species numbers will decrease. Eventually low growth will take over. Control the ground layer with high competition and low disturbance to prevent germination of seeds like garlic mustard. Work with the habitat as it is-improved soil also improves it for weeds. Stack the deck in favor of species you want to establish. There are microhabitats even in a single field. Encourage plant communities. A single plant will not keep weeds out, a mix will. Observe nature. Use trees as canopy and understory. Raw wood chips favor later tree species-oaks & hickories (you need an adjacent seed source). Disturbance under oaks allows suppressed sassafras to sprout. Gravel encourages birds to stop & eat it and poop seeds. Weed whack woods to encourage oak,sedge, and groundcover. Mow meadows in spring for little Bluestem.

Meadows move from annuals and biennials to perennials. Competition changes the composition. You need all types in a seed mix to keep out weeds until perennials take over. You can plant the perennials as plugs. Use annuals instead of mulch for first four years. You can also use the meadow as a nurse crop for planted trees, rather than mowing. Cut weeds, don’t pull them and disturb the soil. Some plants are disturbance species-the seeds only come up when disturbed. Direct disturbance for germination of preferred plants that need it, like Cardinal Flower. Control invasive species that like disturbance with natives that like the same, such as Snakeroot.  Let less desirable, temporary plants colonize and eventually conservative, long-term species will out compete them.

Deer don’t eat plants well mixed in meadows. In woods, plant fewer but bigger trees. Use rebar to protect them from buck rub. Plant a forb they don’t eat in the SAME hole as one they do. Shrubs are tougher to protect.

After 10 years or so, natives are more likely to come in after a  disturbance, including gaps in woods. You will still have to manage some for invasives, but native plants are then at a critical mass in the seed bank.

And then I won a kestrel/owl house… 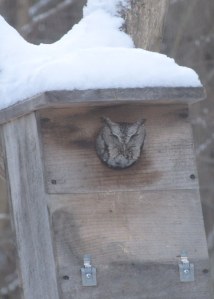