Over the last few years I have been looking up a lot, perhaps because things, in general, are not. I’ve learned a few constellations, taken some pictures of the moon, driven down the road to see a comet, and painted some clouds. Once I started looking at clouds with an idea to immortalize them, I realized what an awesome and various show they put on. Also how important light is to a painter, and how likely I am to be able to convey it, which is “not”. But that’s not my point.

I think one of early, magical sky times for me was when we saw iridescent clouds. You have to imagine where we are located-nestled in a bowl at the bottom of a north facing hill, with an equally tall hill opposite us. The sun doesn’t even hit the ground in winter until after 10 a.m., and to see Venus in the east, we have to stand in the road. So when the sky lights up light like an aurora borealis right in our line of sight, it’s a big deal.

Iridescence is caused by small water droplets or small ice crystals scattering the sun’s light, and is usually found in altocumulus and cirrocumulus clouds. It’s basically just a rainbow overhead, and can be much more defined than I captured in the photo above.

Clouds are divided into three classes based on height (low, medium and high), but also three groups based on form – cumulus (heap clouds), stratus (sheet clouds) and cirrus (fibrous clouds). Since height influences form, these two categories match up. They are further divided into ten genera (and also further divided into species and variety, which is deeper than I will go here).

Here’s an example of cirrocumulus lenticularis clouds sans rainbow. They are often in individual elements or rows, and are high up, thin and super cooled. (You may notice I am not venturing into predictions of the weather. I figure it’s risky enough thinking I have these identified correctly!) 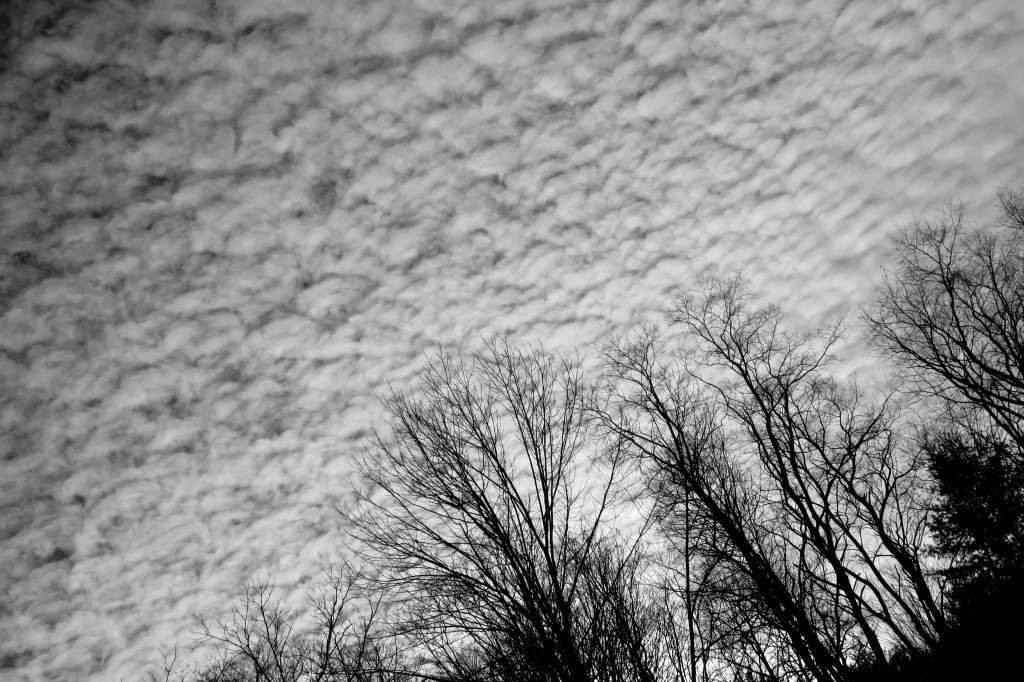 Altocumulus floccus is a high, small heap of cloud tufts, if I’ve got it right, and stratocumulus undulata a wavy, layered small heap. (How’s it working for you so far?)

I’ve hardly touched on all the cloud types, or even all the photos I’ve taken of them, but at least I’ve given an example of each of the three main groups. I hope this gives you a bit of a matrix and sparks your interest in another amazing pattern in the natural world.

Stay safe, be kind, and get your ass outside.

Ain’t it pretty?
So… this clock has been running Backwards ever since @wellemdowd made it for me when she was a kid. Right through battery changes and everything. Now it is going forward. Thinking - bury it in the yard? Shoot it? I fear my fate is sealed.
Apple blossom that is now a tiny fruit.
Yes, that’s right. BABY BUNNY.
From family in Maryland
False Solomon’s seal